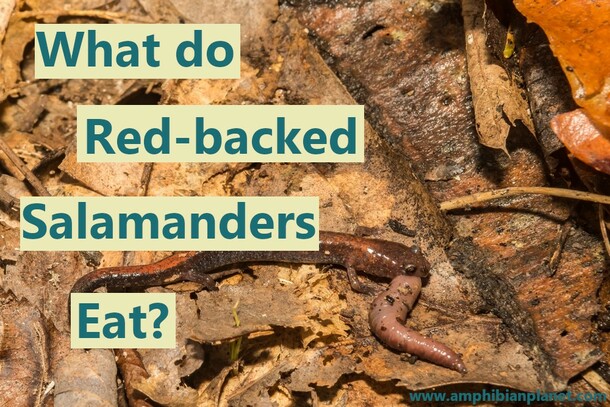 Red-backed salamanders (also called redback salamanders) are one of the most common salamander species in North America. They are often associated with decaying logs or leaf litter on the forest floor, where they spend most of their time hidden. At night, they leave their hiding spots to forage for food.

Like most salamanders, red-backed salamanders are obligate carnivores, which means they eat only animal protein. In the wild, they eat termites, ants, flies, mites spiders, worms, snails, and other small invertebrates. In captivity, pinhead crickets, wingless fruit flies, and small worms make up most of their diet.

Red-backed salamanders are different from most salamanders in that they do not have an aquatic larval stage. They hatch from eggs laid on land and live a fully terrestrial life for their entire life cycle.

When they first hatch, they eat ants, mites, and other small invertebrates they can catch and fit into their mouths. As they grow bigger, they can eat larger insects and other prey.

What Red-Backed Salamanders Eat in the Wild

Female red-backed salamanders lay eggs, usually in moist rotting logs, in chambers underground or under rocks. These eggs look somewhat like grape clusters and are suspended from the roof of the brooding chamber by a short strand.

After about 6 weeks, baby red-backed salamanders hatch from the eggs. These young are fully developed and look just like miniature versions of their mothers. Most salamander species start their lives as aquatic larvae that look similar to frog tadpoles. However, red-backed salamanders do not have a larval stage. They are fully developed when they hatch and live a fully terrestrial life for their entire life cycle.

What Baby Red-Backed Salamanders Eat in the Wild

Baby red-backed salamanders are tiny (about 3/4 inch when they hatch), so they can only eat tiny live prey that they can catch and fit into their mouths.

When they first hatch, they feed on:

As they grow in size, they can eat slightly larger prey:

Baby red-backed salamanders are not very picky eaters and will eat almost any prey that’s small enough to fit into their mouths.

What Adult Red-Backed Salamanders Eat in the Wild

Adult red-backed salamanders are fully grown, meaning they have bigger mouths and stronger jaws. This means they can eat larger prey.

Like the babies, they are not very picky eaters and will eat almost prey they can catch and fit into their mouths. However, they generally like to eat live, moving prey over dead prey items.

Here’s a list of things that would make up an adult red-backed salamanders diet in the wild:

Like all salamanders, red-backed salamanders do not use their teeth to chew, rather they use them to maintain a grip on their prey as they swallow it whole.

For this reason, they will only eat prey that’s small enough for them to swallow whole. This means they will avoid large insects or worms.

Here’s a list of things that red-backed salamanders eat in captivity:

Also, you could feed your salamander wild-caught bugs, just make sure they are from an area that’s clean and free of pesticides or other chemicals.

Captive-bred feeder insects are often raised on a cost-conscious diet that is meant to help them grow quickly. This means they are not as nutritious as wild insects that eat a wide variety of vitamin and mineral-rich food.

If your salamander is given a low nutrient diet, it could develop several health problems. For this reason, it is important to increase the nutritional value of the food you give to your salamander.

This is mainly done in two ways: dusting, and gut loading.

Gut loading is the process by which an animal’s prey is fed nutritious foods at least 48 hours before it is fed to the animal. The intention is to pass those nutrients on to the animal for which the prey is intended.

In this context, you want to give your crickets, or other feeder insects, fresh fruits and vegetables (such as spinach or carrots) that are rich in vitamins and minerals.

After eating this nutritious food, the insects will pass the nutrients on to the salamander when they are eaten.

Besides gut loading, another way to ensure your red-backed salamander gets all the vitamins and minerals it needs is by dusting its food with calcium and vitamin supplements.

Most salamander owners use a commercially manufactured supplement powder.

The process is simple:

How Much & How Often to Feed Your Red-Backed Salamander

Red-backed salamanders need to be fed about two to three times a week. However, as ectothermic (cold-blooded) animals, the temperature will influence the feeding frequency.

Regarding how much to feed your salamander, the general rule is to only offer it as much as it can eat in a single feeding session.

Most salamanders will stop eating when they have had their fill, so this can be learned with a little bit of experimentation. Use personal judgment to ensure most of the food offered is being consumed.

Also, switch up prey items every few feedings to give your salamander a varied diet.

Avoid leaving uneaten bugs (such as crickets) in the enclosure for too long as they can bite or irritate the salamander. Remove all uneaten food within 6 hours of feeding.

How to Feed a Red-Backed Salamander

The easiest way to feed a salamander is to simply dump the food into an exposed area of its enclosure. When the salamander sees the prey moving, it will hunt and eat it, just like it would in the wild.

However, some salamanders, especially those that are still getting used to a new place may be shy and reluctant to eat. In this case, you could entice the salamander to eat with the use of some tweezers.

Use the tweezers to gently hold the food item, then rub it near the nose of the salamander. Once he sees it, he will grab and eat it.

Captive baby red-backed salamanders are aggressive predators. Like those in the wild, they prefer to eat moving prey, this means they have to be fed tiny live food. The appropriate size will depend on the size and age of the baby salamander.

When they first hatch, they can be fed:

As they grow larger, they can eat larger prey such as:

The larger they grow, the larger the size of prey they can eat. Eventually, these young salamanders will grow large enough to be able to have a diet very similar to that of the adults.

Why Isn’t My Red-Backed Salamander Eating?

The first reason a red-backed salamander may reject food is that the prey item you are offering is just too big. Remember, salamanders do not chew their food, so they will not eat anything they can now swallow whole.

If you offer your red-backed salamander an excessively large worm or insect, it most likely won’t even attempt to eat it. As a general guide, never offer a salamander any prey larger than the width of its head.

Another possible reason a red-backed salamander may reject food is that it is not used to eating the food you are offering. Try switching the food item being offered. Most salamanders will readily accept worms and crickets.

A fourth possible reason for a salamander may be the temperature. Remember, salamanders are ectothermic animals. When the temperatures are low, they will have a lower rate of metabolism, and be less active, so they won’t have the biggest appetite.

This is perfectly normal, and the salamander will have a much better appetite with an increase in the temperature.

Captive salamanders have a diet that is very limited in comparison to that of wild salamanders. This means they do not get a wide variety of nutrients from different food sources.

Also, as earlier mentioned, captive-raised feeder insects are often given poor diets, so they aren’t as nutritious as wild insects.

If you do not dust or gut load feeder insects, your salamander will not get all the nutrients it needs and may develop health problems.

Remember, salamander do not chew their food. If you offer a tiny red-back salamander a full-grown cricket, it most likely won’t eat it.

However, if it does attempt to eat it, it may get injured or choke in the process. Never offer a salamander any prey item larger than the width of its head.

Salamanders have huge appetites. In the wild, food is not very easy to come by. However, in captivity, they have a seemingly endless supply of food. This means obesity becomes a real possibility.

Overfeeding can lead to obesity which could, in turn, lead to the salamander developing health problems.

On the other end, underfeeding means your salamander will not get all the nutrition it needs which will most likely have poor health.

Red-backed salamanders are not very picky eaters. They have huge appetites and will eat almost any prey they can catch and swallow whole.

Although not a particularly popular pet, they are relatively easy to care for. In the wild, they seem to really love eating termites, ants, and spiders. As pets, they can be fed springtails, white worms, and a wide variety of other appropriately sized foods.

Just remember to dust or gut load feeder prey so your salamander gets a nutritious diet and grows strong and healthy!