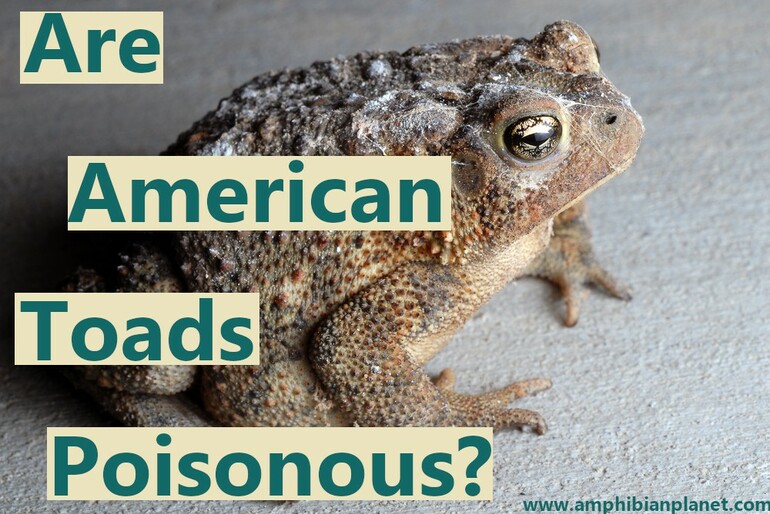 American toads are medium-sized toads found throughout the eastern United States and Canada. They generally have a brown or reddish coloration, with scattered dark spots each encircling one to three wart-like bumps on the back. But are American toads poisonous?

American toads are mildly poisonous. They have large parotid glands behind the eyes, and warty glands on the skin that produce a milky poisonous fluid known as bufotoxin, which tastes bad to many predators. This secretion is very irritating when it comes in contact with your eyes and mucous membranes, but it can make smaller animals such as dogs or cats sick.

Despite their poisonous secretion, American toads are usually harmless to humans. Their toxin is only harmful when ingested (such as when you pick up an American toad with your bare hands, then rub your eyes before washing your hands).

As a safety precaution, do not touch or handle American toads (or any other toads) unless necessary.

If you do handle one, remember to thoroughly wash your hands with antibacterial soap and water after. Do not rub your eyes or stick your fingers into your mouth or nose before washing your hands.

American Toads Are Only Mildly Poisonous

American toads produce a poisonous fluid known as bufotoxin that is meant to make them unpalatable to potential predators. People unfortunate enough to ingest this toxic secretion may experience strong irritation and general discomfort, but it is not lethally toxic. Still, it can make dogs, cats, and other small animals sick, especially when ingested in significant quantities.

The majority of toxins found in toads are in the large parotid glands located behind the eyes.

That being said, it is important to note that toads typically do not secrete their poison at will. It has to be squeezed out. For this reason, animals at more at risk than humans.

A curious dog or cat might fall victim to an American toad if it bites the toad and squeezes out the poison. Small or sickly dogs/cats are at the greatest risk.

Some animals such as eastern hog-nosed snakes, and garter snakes have developed immunity to the poison of the American toad and will readily eat these toads with no consequences.

American Toads Are Not Venomous

If you are like most people, you have probably (at least once) used the words “venomous” and “poisonous” interchangeably.

In other words, Venom is actively injected, usually through stings, fangs, or barbs (think rattlesnakes, scorpions). Poison on the other hand is delivered much more passively and has to be absorbed/ingested into your body.

It can be ingested when it comes into contact with your eyes, lips, mucus lining of the nose, or open cuts on your skin (think poison dart frogs).

American toads secrete toxins to stop predators from eating them, but cannot actively inject these toxins into a predator. This means they are poisonous, but not venomous.

What Other Ways Do American toads Defend Themselves?

Apart from a poisonous secretion, American toads have other ways to defend themselves from predators.

As the first line of defense, they have a coloration that helps them camouflage or blend into the leaves and other debris in their environments.

When an American toad sees a predator getting close, it will crouch and remain still, relying on camouflage to escape the notice of the predator.

However, sometimes camouflage alone is not enough. When an American toad is spotted by a predator (especially a snake), it will inflate its lungs, lower its head, extend its hind limbs, and lift up its body to make itself more difficult to swallow. Sometimes, it may even urinate on itself to become a less attractive meal.

These toads will only rely on their poison as a last resort defense when all their other defenses fail to dissuade the predator.

Are American Toads Dangerous to Humans?

American toads typically aren’t dangerous to humans. While they do secrete a toxin, it is unlikely that anyone would ever be seriously harmed by this toxin unless the toad was licked, placed in the mouth, or swallowed.

Since most people won’t try to eat or lick a toad, the most likely way you would be harmed would be by handling an American toad with your bare hands, then rubbing your eyes, or sticking your fingers into your mouth without first washing your hands.

Doing this would enable the toxins to be absorbed by your mucus membranes and likely lead to strong irritation and general discomfort.

If the toxin comes in contact with your eyes, you may get a very painful sting, similar to the feeling you get when chili gets in your eye. It may even cause inflammation in the mucous membranes of your eyes.

You can also ingest the toxin when you handle an American toad with open cuts or scratches on your hands. This would most likely lead to an intense burning sensation and a feeling of numbness at the point of contact. But usually nothing more serious.

For this reason, it is a good idea to avoid handling American toads or any other toads. Although their poison is not lethal when ingested by humans, it can still be very irritating.

If you ever need to handle a toad, remember to avoid touching your eyes, nose, or mouth until you have washed your hands. Also, avoid handling toads with your bare hands if you have open cuts or scratches on your hands.

It’s Not Just the Toxin You Should Worry About

The bacteria do not cause any illness in the toad – so an American toad carrying salmonella bacteria may look very healthy, but can pass the bacteria off to humans.

You can be exposed through either direct or indirect contact with the toad its droppings, or anything the toad came in contact with. (For example, if you touch an American toad, it is droppings or water where the toad has been, then touch stick your fingers into your mouth without first washing your hands).

Fortunately, you won’t get sick by simply touching a toad. The bacteria can only cause illness when they are ingested. Therefore, thoroughly washing your hands with anti-bacterial soap immediately after touching an American toad should keep you out of harm’s way.

It is not advisable to let children under the age of five or people with weakened immune systems handle any toads. This is because they are at higher risk of getting a salmonella infection. Children in particular are less likely to wash their hands and tend to touch their mouths much more frequently than adults. Doing this after handling a toad can make a child very ill.

Are American toads Poisonous to Dogs or Cats?

Since American toads secrete a toxin, a dog, cat, or any other pet that bites or picks up an American toad would get a mouthful of foul-tasting toxin and most likely let go right away.

Your dog (or cat) is most likely to have an encounter with an American toad from March through September when toads are the most prevalent. Especially in the very early morning hours or after dark when toads are more likely to be active

If you find your pet harassing an American toad, quickly separate the dog from the toad. If the dog has the toad in its mouth, quickly remove the toad from your pet’s mouth. Call your veterinarian or pet poison control line afterward for further instructions.

While waiting to get help, you can reduce the amount of toxin absorbed by doing the following:

Alternatively, you could flush the mouth of your pet with large amounts of running water. Be careful to rinse the oral cavity but not force water down the throat. Try to point the dog’s head downward to decrease the chances of water being swallowed or inhaled.

Toads and frogs are known to carry roundworms, tapeworms, and other parasites. This means if a dog (or cat) eats an American toad, it is not only at risk of poisoning but may also consume parasites and develop a parasitic infection.

This means that oils, salts, lotions, perfumes, soap, insect repellents, sunblock, and other substances you might have on your hands can pass right through their skin and end up inside their body.

For this reason, it’s advisable to observe amphibians from a distance, without physically touching them.

If you ever need to handle an American toad (such as moving it off a road), take the following precautions to protect both you and the animal.

Wearing gloves will not only prevent you from coming in contact with toxins and bacteria that may be on the toad’s skin but will also protect the toad from harmful substances you may have on your hands.

If you have open cuts or scratches on your hands, it is HIGHLY recommended to wear gloves. Remember, the poison American toads produce can be irritating when it comes in contact with breaks on your skin.

Even if you were wearing gloves, it is still a good idea to go the extra mile by washing your hands. As earlier mentioned, American toads secrete a toxin and may carry bacteria that can be harmful, so it’s best to protect yourself.

Before washing your hands, do not touch anything (you could spread bacteria) – and remember not to rub your eyes, touch your face, or put anything into your mouth.

The toxin is not absorbed through your skin but can be absorbed when it comes in contact with your mucus membranes, or breaks on your skin.

Are American toads poisonous to humans? American toads produce a milky poisonous fluid known as bufotoxin, which can be poisonous when ingested by humans. This toxin may cause irritation and general discomfort, but is not lethal to humans. However, eating or licking, or placing an American toad in your mouth could make you very sick.

Are American toads poisonous to dogs? American toads produce a toxin known as bufotoxin, which is poisonous when ingested by a dog. This means if your dog eats, licks, or bites an American toad, it is at risk of poisoning. If a dog ingests sufficient quantities of this toxin, it could fall very sick.

American toads are beautiful amphibians that are fun to observe in the wild and make awesome pets. The only danger comes when you handle them so it’s best to leave them alone!

If you ever need to handle one, doing it very carefully and washing your hands immediately afterward, should keep you out of harm’s way

Also, you could wear gloves. The risk of absorbing the toxin from an American toad can be significantly reduced by simply wearing gloves and observing sufficient hygiene. With proper handling, American toads can be harmless creatures.