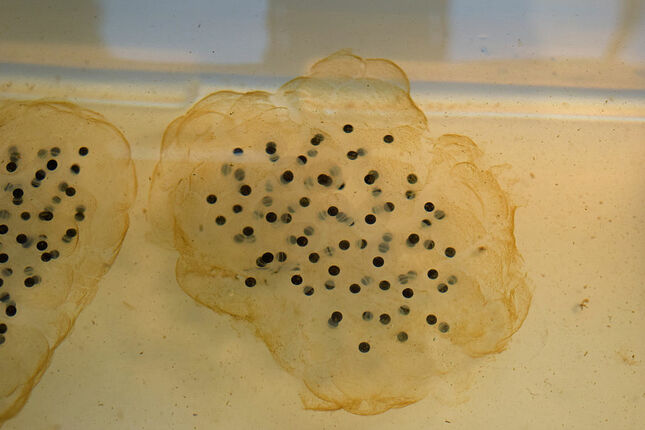 Many spotted salamanders may lay eggs in the same place, so it is common to find dozens of egg clusters in the same location.

These eggs are covered by a thick jelly-like coating to protect them from unpredictable environmental conditions. It also protects them from predators (such as the eastern newt) that may try to eat them.

In early spring, warm rains trickle down into underground burrows where spotted salamanders spent the winter hibernating, and lure them to the surface. This is usually before the snow is completely gone and when pools are still partly frozen.

Once they emerge, spotted salamanders will migrate to wetlands with deep enough water where they can breed. This mass migration is often referred to as “the big night”.

In some towns, people close roads and gather to watch thousands of salamanders and frogs on their breeding migration.

Although the mass amphibian migration is referred to as the “Big Night”, it rarely occurs on just one might. Most times, it is actually spread across two or three big nights, and few medium-sized nights, and a few small nights.

During this migration, spotted salamanders can travel significant distances, sometimes up to half a mile.

Many salamanders can breed in ponds, lake edges, slow-moving streams, roadside ditches, or even deep tire tracks, but spotted salamanders very strongly prefer to breed in something called “vernal pools“

Vernal pools are temporal pools of water that form in the spring. They are formed when depressions on the ground are filled with water from melting snow and falling rain.

They are typically small and shallow, and unlike a pond or lake, they have no permanent source of water. This means they dry up in the summer.

Since they are temporal, they do not have fish that could eat the eggs before they hatch. This makes them ideal breeding sites.

Spotted salamanders prefer to breed in the same pool each year and will often enter and leave the breeding ponds using the same path. However, a few individuals may use new breeding sites.

These spermatophores look like small white cones and may be deposited on the pool bottom or even along submerged twigs and other vegetation near the pool bottom.

A day or two after the arrival of the males, the female spotted salamanders will arrive at the breeding pools and pick up the spermatophores with their cloaca, and fertilize their eggs internally. One male can fertilize several females, and a female can take in sperm from several males.

Once a female picks up a spermatophore, she will look for an attachment location for depositing her eggs. This is often on a submerged twig or other vegetation 8-10 inches of the water’s surface, but occasionally much deeper

If the pool has lots of emergent vegetation, eggs are often deposited in open areas which receive lots of sunlight.

Spotted salamander eggs are laid in masses of about 50 to 100 eggs; however, some masses can have as few as 10 or as many as 250 eggs. Each female can lay up to 3 masses. When laid, each mass is embedded in special secretions from a gland in the salamander’s body. These secretions rapidly absorb water to create a jelly-like coating around the entire egg mass.

This jelly is usually clear but can sometimes be cloudy or opaque white. It is meant to protect the eggs from drying out if the water level drops. In addition to this jelly coating, each individual egg within the egg mass has a membrane-like outer shell made of jelly.

Spotted salamander egg masses are highly variable in size and shape. However, they usually range in diameter from one to six inches and tend to be oval, elongated, or sometimes even kidney-shaped.

Unlike many other amphibian egg masses, spotted salamander egg masses have a very dense/firm texture, similar to gelatin. If you pick up one of these egg masses, it will usually hold its shape in your hand.

As earlier mentioned, spotted salamanders lay eggs in communal breeding spots, so it’s common to find both clear and cloudy/opaque egg masses in the same pool or even attached to the same stick.

Algae Sometimes Give the Eggs a Greenish Glow

While the outer jelly surrounding salamander egg masses is important to protect the eggs, it makes it diffuse for oxygen to diffuse to the developing embryos (and carbon dioxide out).

This creates a problem because if the embryos do not breathe efficiently, they could suffocate and die before they fully develop.

To get around this, spotted salamanders have developed a symbiotic relationship with a special type of algae known as Oophila amblystomatis (which means “loves salamander eggs”).

The algae grow and bloom inside each egg. They then absorb carbon dioxide and ammonia waste produced by the embryo and produce oxygen through photosynthesis.

In this way, the embryo gets all the oxygen it needs for proper development and the algae get a nitrogen-rich environment to thrive.

However, as a side effect, the algae gives spotted salamander eggs a bright green glow. In the past, scientists thought the algae only grew in the Jelly of the eggs. However, a 2010 study discovered that the algae also lives inside the cells of the salamander embryos as they develop.

This is the only known case where algae grow inside the cells of a vertebrate.

Oophila algae are not always present in spotted salamander eggs masses. It is possible to find clear egg masses and greenish egg masses in the same pool, or even side by side.

How Long Do Spotted Salamander Eggs Take to Hatch?

Spotted salamander eggs hatch about 30-60 days after they are laid. However, this will vary widely depending on the environmental conditions. The eggs will generally develop faster at warmer temperatures than at colder temperatures.

There have even been reports of spotted salamander eggs developing and hatching in only two weeks, however, this is unverified so it should be taken with a pinch of salt.

After hatching baby spotted salamanders (larvae) will live a fully aquatic life, just like frog tadpoles, until they transform into adult salamanders and leave to water.

What Baby Spotted Salamanders Look Like When They Hatch

Newly hatched spotted salamander larvae have feathery external gills just behind the head and below these, a pair of “balancers” which keep them upright. Balancers are lost after a couple of days. These larvae grow quickly, feeding on daphnia and other aquatic invertebrates until they are ready to transform into terrestrial juveniles through a process known as metamorphosis.

During metamorphosis the larvae will go through the following:

Once this process is fully complete, the larvae will leave the water and grow into adult spotted salamanders that people are more familiar with.

Wood frogs and Spotted salamanders usually lay eggs in the same pools. Since these egg masses look very similar to each other, they can be difficult for the untrained eye to tell apart.

Here is how you can tell wood frog eggs from spotted salamander eggs:

If you took a close look at a wood frog egg mass, you would easily notice the contour of each individual egg on the outer layer of the egg mas. This contour gives wood frog egg masses a bumpy surface, sort of like a cluster of grapes.

On the other hand, if you looked at a spotted salamander egg mass, you wouldn’t see the contour of the eggs on the outer layer, since the entire egg mass is covered in an outer layer of jelly.

The surface of the egg mass would look smoother and more uniform. However, if you looked very closely into the jelly, you would see the outline of each egg within the mass.

When floating on the surface of the water, wood frog eggs will look bubbly and bumpy, while spotted salamander eggs will look like blobs of jelly with eggs visible inside.

Also, spotted salamanders sometimes have a cloudy white coloration, but this is never the case for wood frog eggs.

3. Location Within the Pool

Another difference is that, while wood frogs often deposit their eggs near the water’s surface, or sometimes on the surface itself, spotted salamander egg masses are usually deposited much deeper in the pool (8-10 inches below the surface) or sometimes even on the pool bottom.

Also, although both spotted salamanders and wood frogs deposit their eggs communally, they do in different ways.

Wood frogs often lay their eggs in large rafts. It is common to find large communal masses in a single area with eggs from multiple wood frogs.

On the other hand, spotted salamanders lay their eggs in individual clusters widely dispersed within a pool. Even when laid on the same stick, individual masses are very clearly identifiable.

How to Care For and Hatch Spotted Salamander Eggs in Captivity

Construct a pool about 8 feet by 12 feet utilizing wooden or concrete walls sunken into the ground to a depth of about 10 inches. Place lots of sand and natural forest debris into the pool to simulate a natural pond bottom.

Place the eggs in the pool and remember to watch pool water levels and monitor the eggs to ensure the embryos are developing properly.

Once the eggs hatch, you can start feeding the larvae (baby salamanders) on the second or third day. Before that, the leftover nutrients from the eggs will meet all their energy requirements.

The outer protective jelly coating is the only anti-predator defense these eggs have. For this reason, many predators, most notably the eastern newt, frequently eat spotted salamander eggs.

Still, they sometimes lay their eggs in ditches, deep tire tracks, or shallow puddles after a rain. If the water in these bodies dries too soon, the eggs will not hatch; and if they do, the larvae will not develop enough to leave the water.

Spotted salamanders mate in the spring and lay their eggs in masses in water, attached to twigs and other vegetation below the water’s surface.

These masses are relatively easy to identify and can be differentiated from wood frog eggs by the jelly coating covering the entire egg mass.

If you ever arrive at a known breeding pond looking for spotted salamander egg masses but do not see any; carefully look at the bottom of the pool. If you see tiny white cones that look like specks of paint (spermatophores), you are too early.

Give it a night or two and you will most likely find egg masses when you return.