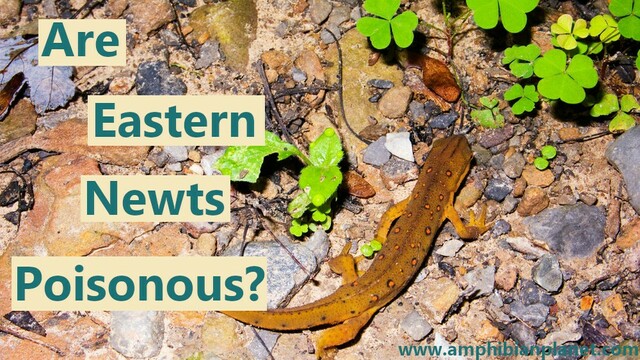 Eastern newts (sometimes called eastern red-spotted newts) are found across much of the eastern united states and up into Canada. These newts are easy to identify by their olive-green coloration and the black-bordered red spots along their back. But are eastern newts poisonous?

Eastern red-spotted newts produce a highly poisonous toxin known as tetrodotoxin as a defense against predators. Juvenile newts known as ‘red-efts’ are more than ten times more poisonous than adults and have a brilliant orange-red coloration that warns predators of their toxicity.

Tetrodotoxin has no known antidote and can cause death by suffocation in as little as six hours after ingestion.

Despite the presence of this skin toxin, eastern newts are quite safe and unlikely to cause you problems as long as you take a few simple precautions.

To be safe, very carefully wash your hands after handling eastern (or any) newts. Before washing your hands, do not touch your face, especially not your eyes or mouth.

Eastern Newts Have 3 Life Stages With Different Levels of Toxicity

Female eastern newts lay their eggs in vernal pools, ponds, and other fishless water bodies. After a few months, these eggs hatch into tiny larvae that have smooth olive-green skin, external feathery gills, and live much like tadpoles.

At this stage, the larvae are not very toxic and are preyed on by many predators. However, research has shown that they are capable of increasing the production of toxins while around predators.

After about five months, the aquatic larvae undergo a process known as metamorphosis in which they shed their gills and develop limbs for a life on land.

This is their teenager or ‘red-eft‘  stage of life. In this juvenile stage, eastern newts are very highly poisonous and sport a brilliant orange-red color that warns predators of their potent toxin.

After about two to three years, the efts mature into adults and return to the water to live a mostly aquatic life.

As adults, the vivid orange-red coloration of their juvenile stage changes to an olive green coloration with red spots on their back (hence the name “red-spotted newt”). Adult eastern newts are only about one-tenth as toxic as they were in their red eft stage. However, their toxin is still very potent in sufficient quantities.

Coloration Tells Predators That Eastern Newts Have a Toxin

Many poisonous animals advertise the fact that they are toxic by having bright or contrasting colors. This is called aposematism or warning coloration.

It makes predators aware that the brightly colored animal is poisonous or distasteful and would make a horrible meal.

In the case of eastern newts, the bright orange-red coloration of their juvenile phase warns predators of their highly toxic skin secretion.

Even though adults are only one-tenth as toxic as efts, the red dots still serve as a reminder to predators that they are not to be messed with.

An animal that eats a brightly colored eastern newt will get very sick and remember the experience. The next time the animal sees another similarly colored newt, it will associate the coloration with danger and learn to avoid that particular species.

“Poisonous” Is Not “Venomous”

You have probably heard the words venomous and poisonous used almost interchangeably. However, they mean very different things. Sure, they both refer to toxins that can be harmful to us, but the difference lies in how those toxins are delivered.

Eastern newts do not have the ability to inject their toxin, they are only poisonous when their toxins are ingested. This means they are poisonous but not venomous.

Are Eastern Newts Dangerous to Humans?

Eastern red-spotted newts are typically harmless to humans. While they do secrete a potent toxin, it is unlikely to be of serious harm to humans unless the entire newt is swallowed.

Since most people won’t try to eat or lick a newt, the most likely way you would be harmed would be by handling an eastern newt with your bare hands, then rubbing your eyes or touching your mouth without first washing your hands.

Doing this would enable the toxin to come in contact with your mucous membranes and most likely lead to serious irritation.

You could also be harmed by handling an eastern newt with cuts or scratches on your hands, enabling the toxin to be absorbed into your body.

Toxins absorbed this way would most likely lead to an intense burning sensation and a feeling of numbness at the point of contact.

Exposure to salmonella bacteria can cause an infection called salmonellosis in humans. Most infections are non-life-threatening but the bacteria can be absorbed into the bloodstream from the intestines and infect other organs leading to severe illness.

Children under the age of five or people with weakened immune systems have a higher risk of falling seriously ill from a salmonella infection.

Fortunately, you will not get a salmonella infection by simply touching a newt, the bacteria can only cause illness when they make their way into your body.

As a safety precaution, always wash your hands with anti-bacterial soap after handling newts, their cages, equipment, or anything in their enclosure.

Are Eastern Newts Dangerous to Dogs or Cats?

Since eastern newts secrete a toxin, a dog, cat, or any other pet that licks or eats one of these newts is potentially at risk of poisoning.

While adult eastern newts are only mildly toxic, juvenile (red-eft) eastern newts have a very potent toxin that can be lethal to a dog in sufficient quantities (such as if the newt is eaten).

For this reason, it is important to keep your pets away from any newts be it in the wild, or any pet newts you may have at home. Keep pet newts in a secure enclosure so they do not come in contact with any of your other pets.

If you notice your pet attacking a newt, take it away from the newt and contact your vet right away for further instructions.

Generally, it is not a good idea to handle newts. This is because they have a very delicate absorbent skin that allows liquids and gases to pass through it.

This means that chemicals and other harmful things on your hands can pass right through their skin and end up inside their body.

For this reason, if you ever need to handle a newt (or any other amphibian) take the following precautions.

Make sure your hands are clean and washed off very thoroughly. Not just clean from dirt, but washed off so thoroughly that no residue of soap, lotions, or any other substances that could harm the newt remain.

If you have any cuts or scratches on your hands, it is highly recommended to wear gloves.

After handling, wash your hands with anti-bacterial soap so you do not ingest any toxin or bacteria you may have picked up from the newt.

Even if you were wearing gloves, I recommend you go the extra mile and wash your hands to protect yourself. Before washing your hands, do not rub your eyes, touch your face or put anything in your mouth.

Question: Can an Eastern Newt Kill You?

Answer: Eastern newts, especially in their red eft phase, have a toxin that is potent enough to be lethal to a human. However, simply touching an eastern newt won’t be lethal. You would have to actually eat the newt to ingest enough toxins to cause you serious harm.

Answer: Almost any animal with a mouth can use it to defend itself when necessary. Eastern newts do bite, however, they are very docile creatures and will rarely bite a human.

The most likely time an eastern newt will bite a human is when it is being handled in a way that causes it stress. A bite from one of these newts is not much to be worried about because it is venomous or anything of that nature

Eastern newts are amazing little creatures that are popular pets among many amphibian enthusiasts. While they possess a toxin, the only danger comes when you touch or handle them so it is best to leave them alone.

This will not only protect you from the newts’ toxic secretions but will also protect the newt from any harmful substances on your hands. It’s a win-win!